Hurricane Katrina devastated New Orleans in 2005 and caused an estimated damage of $211 billion. The four hurricanes this year –Harvey, Irma, Jose and Maria – have already put the estimated destruction at $200 billion, and it is not the peak of the hurricane season yet.

The hurricane season still has two months to go and four more Category 4 storms are expected. According to the National Hurricane Center data, September 2017 has been the most active hurricane season, with the cyclone-energy index at 155.4, which is 0.4 higher than September 2004.

In a given year, normally 12 tropical storms are known to form in the Atlantic. However, the weather data shows abnormal activity taking place this year as there have been 13 tropical storms by now. Four of these have been major hurricanes, greater than Category 3 and have caused landslides along with structural damage costing billions.
The US National Hurricane Center data tracked hurricane damage since 1900, putting 2017 second to 2005 in the most expensive damage and it is not even the peak yet. The hurricane season ends on November 30; therefore, the full cost of the major hurricanes this year is yet to be estimated since more hurricanes are on the way through the Atlantic, one expected to be major. 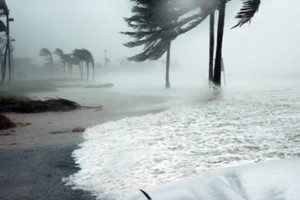 The data may have incomplete information because the authorities are still unable to reach the areas with deep floods, strong winds and enormous piles of debris. Despite improvements in weather forecasting, this season has proved to be deadlier. In 1900’s, around 12,000 people had perished due to inaccuracies in forecasts and feeble warnings, damaging $104 billion worth infrastructure.

The US has experienced the deadliest hurricanes this decade, the deadliest being since 2005. Back in 1928, Lake Okeechobee in Florida overflowed due to Category 4 hurricane, causing 15-feet floods and leaving 2,500 dead. Hurricane San Felipe took 2,748 lives in 1928 in Puerto Rico and Florida.

This year, Irma has reported to have been the most powerful, Category 5 hurricane with winds at 295 kph, devastating the northern parts of Virgin Islands and Puerto Rico, compared to 185 mph winds of Florida Key storm in 1935; 190 mph of hurricane Allen in 1980 and Wilma in 2005.

The ocean water needs to be warm enough to cause a hurricane; an after-effect of global warming, Irma was a degree warmer than average of 25 degrees Celsius.
The 2017 hurricane season is recorded as the strongest in 139 years of US history. The unusual changes in Atlantic Ocean would bring more hurricanes, therefore; making 2017 the most expensive in infrastructural damage. The poor concrete in several states is not able to withhold the strong winds and power is many areas may remain out for more than a month.

This season has, however, been less deadly because of advancements in meteorological equipment, mainstream media and social media expansion. The people were warned just in time resulting in an evacuation of 7 million people – the largest in US mass migration history and crises. With improved satellites, there has been more observation of hurricanes than what was possible, let’s say, a century ago.

Nonetheless, the full extent of the damage is yet to be discovered.