A 9.5-MW machine, one of the most powerful and giant turbines in the world, aims to dwarf the Empire State Building and the famous London Eye. 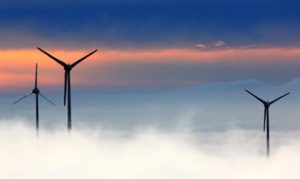 Being 614 feet tall – 187 meters, the tip of V164-9.5MW turbine will be looming over the 135-meter tourist attraction – the London Eye – at Thames River’s south bank. A single turbine machine is expected to generate power that would be sufficient to support 8300 UK homes as stated by Denmark-based turbine maker – Arthus.

The Shanghai Electric Power Design Institute Co. and Goldwind, signed the agreement of turbine supply for the Pasuquin wind – 132-MW in the Philippines in the second quarter of this year. This was the first deal in the market by a Chinese turbine maker, as stated by Goldwind International Holdings (HK) Ltd.

The Stockyard Hill Wind Farm in the Victoria State of Australia has also been bought by Goldwind in May from Origin Energy Ltd. The project is expected and planned to have the capacity of almost 530 MW. Goldwind International also confirms signed contracts outside China, for approximately 2 GW. Goldwind, taking the lead in making wind turbines, also had an in-principal agreement to build a 144 MW wind farm, with Aurora Energy Pty at the Central Highlands in Tasmania – Cattle Hill, according to a report. With that, Goldwind also presented clients in Africa with its new 3-MW platform-stated unit.

The actual power output of a wind turbine solely depends on its height and size. Size varies, but these days, the typical wind tower is around 70 meters tall, attached to 50 meter long blades. On the upper end, the power output of these turbines ranges between 1 – 5 megawatt, enough to support almost 1,100 homes. 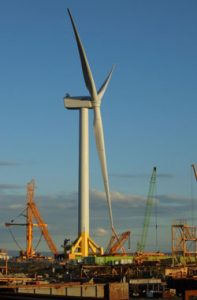 As per the assistant professor of aerospace and mechanical engineering at S.U.N.Y Buffalo University, John Hall;

“There’s this motivation to go to larger wind turbines, and the reason is pretty much economics,”

One reason for a giant turbine to be more cost-effective is because the wind blows steadily and stronger at higher altitudes. Thus a taller structure or wind turbine will be able to capture more energy in less time and with more power. Another reason for making bigger turbines is that taller towers allow lengthier blades and the power of turbine is largely related to the circular area that is covered by the blades.

Thus, if the length of the blade is doubled, the turbine system accelerates and produces 4 times more energy. Moreover, bigger turbines come with lower “cut-in” speed which is the speed at which energy is generated by the turbine.