According to the Climate Council’s report, heat waves are becoming more frequent and longer in Australia. 2016 has broken the record of the hottest year in the history of the earth. Reports from both local Australian sources and global sources say that this is just going to get worse during 2017.

As the extra carbon gets emitted into the Earth’s atmosphere, the world is getting hotter and Australia is the geographical point that will experience the highest heat. 2016 also saw a dangerous drop in Australia’s wheat yield and higher temperatures pose a direct threat to children, the elderly and people who work outdoors in the scorching sun.

Different states will have different effects due to this intense rise in temperature. In the previous year, Brisbane has experienced the heat wave 8 days earlier than the normal period and the number of days that experience a temperature higher than 35°C has been expected to increase from 12 percent to a striking 18 percent by 2030.

As we go ahead in the timeline, the effects seem to be getting worse. A report shows that by the end of the century, Australia’s Maximum one-day rainfall is expected to rise by 18 percent. Thunderstorms for the state of Brisbane are expected to rise by 14 percent at till 2100 and tropical cyclones will increase only in intensity and not in quantity.

Although there are measures being taken to prevent the health effects that follow this devastating change, unless a change in the way we live is made, the effects will worsen and will just add to the list of people at risk.

Greenhouse Gases are a major problem and controlling the amount of carbon emitted in the air is a serious effort that is not just one country’s job but a global effort. With such compelling evidence present in front of the human race, it is difficult to understand that a global threat that can cause massive changes and destruction in the way of life is not being addressed unanimously but is still being contested for authenticity.

The Earth’s temperature is rising year by year with no effort being made on a large scale to reduce this effect and control it. NASA has joined the fight against climate change and has produced some very alarming evidence of the movement of Carbon Dioxide in the atmosphere and how it is affecting life all over the globe.

Major corporations in the world that have become accustomed and made the people accustomed to the way of life that is currently being followed will try and oppose climate change because that means more expenses for renewable facilities and lesser profits from fossil fuel sources.

Although there are some countries that have made it a top priority to limit their nation’s carbons footprint, 70% of the world is still in darkness and refuse to believe the great threat that is slowly growing in size. 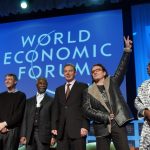 Climate Change is a Big Deal at the World Economic Forum: Can Trump be the Reason? 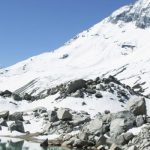