Deeper wells being dug by farmers to fight the unending drought

Rice farmer, Dakshinamoorthy, who used to grow crops over three acres of fields in the South Indian state of Tamil Nadu, has to dig deeper and deeper for his tub-well to tap into the groundwater in the soil. According to him, the underground water table has dropped below 300 feet, which is nearly double a few years ago.

The water situation in the Cauvery delta region is challenging the area’s economic base which revolves around rice crop.

As western Rajasthan and the state of Gujarat are experiencing heavy rains and floods in July, inhabitants of Cauvery delta are wishing and praying for a Monsoon with enough rainfall to get sufficient water for their crops.

However, rain patterns in June and July were not very reassuring because the state of Tamil Nadu has received 31% less rain than normal. People are fearful that the drought will extend if the same situation persists in the coming days.

Like Dakshinamoorthy, 85% of the farmers of the state own less than 2 hectares of land. In the previous year, due to the shortage of water, crops of many farmers failed to grow optimally. Cattle-keeping is another important source for farmers to make their ends meet. But with the shortage of even drinking water for humans, keeping cattle has become an uphill battle.

Due to the piling up of issues, Dakshinamoorthy and many others like him are contemplating moving out of the state. Many have already migrated. 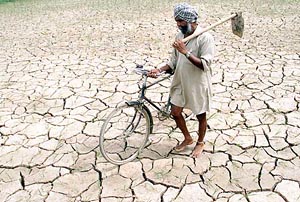 From November 2016 to May 2017, more than 200 farmers have either died of sudden heart attack or ended their lives. Every death has a distressing story behind it.

For instance, there is a village named Anaikudy along the river Kollidam that has become devoid of water.

There, a small-time farmer committed suicide due to his mounting debts. His attempts to dig well ended in futility and pushed him to end his life.

Anthropogenic and climatic factors have hit the Cauvery River badly

S Ranganathan, a farmer and general secretary of the Cauvery Delta Farmers says, “The crisis goes beyond the drought. The backbone of delta prosperity is under threat, and it’s scary.”

The cauvery River supplies water to five main tributaries and hundreds of canals and channels and many of them have run dry because of water scarcity. V Deivasihamani, a retired irrigation engineer with 40 years of experience working in the delta region thinks that climate and anthropogenic factors have led to this situation.

According to the study conducted by Madras Institute of Development Studies (MIDS), 20% of farming land in the Cauvery delta has become uncultivable in 40 years due to climate changes and anthropogenic reasons.

A recent example of climate change adversity can be seen in the previous year when farmers of Tamil Nadu couldn’t even grow one crop because of the rain shortfall of more than 60% that year. 3.5 million hectares of land suffered from the resulting draught. 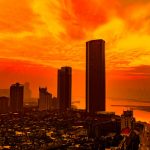