When the US government or to be specific, Donald Trump, withdrew the country from the Paris Climate Change Accord, the world started looking towards other nations to enhance global leadership towards climate change. 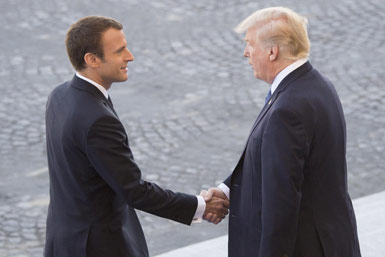 And in these collective efforts, France is announced to be the first country that will phase out the gas and oil exploration, including production by the year 2040 – according to the draft bill.

This has raised questions in the heads of many. People are making speculations if France is truly stepping up into the era of global leadership towards climate change.

One major aspect of the Paris Climate Change Agreement is to keep the temperature below 2 degrees, striving for 1.5 degrees in actual, as, in the case of failing to do so, a quarter of the marine life, including almost half a billion people will be completely wiped out.

According toBen Oquist – Executive Director of Australia Institute – the easiest way to meet the agreement responsibilities, made under the government of Abbott, is to focus on the energy sector. Otherwise, the nation might head down a difficult path in the near future.

“While political uncertainty continues to shroud energy policy, this new modeling analysis shows higher levels of renewables will be needed if Australia is to meet the Paris targets in an economically efficient manner.Regardless, Australia’s 26-28% emissions targets will have to be lifted in the future if Australia is to meet its obligations to help avoid the 1.5-2 degrees of global warming agreed to in Paris.The reality is that the electricity sector will have to ‘go faster’ in reducing emissions than other sectors of the economy.Outside the electricity arena abatement is more expensive and the technical and political complexities are greater.”

French President Emmanuel Macron stated to the United Nations that the Paris Climate Change Agreement is a pact between future generations. Moreover, he also confirmed to Donald Trump that the climate agreement is not going to be renegotiated on any terms.

However, Macron showed support for the US by stating that the doors of the agreement will remain open if the US wants to re-join the efforts towards climate change, and suggested that he hopes he will convince Trump accordingly.

In past years, Macron has shown exceptional leadership for climate change. He also rebuked Trump after his move of withdrawing the US from the Paris agreement and tweeted; ‘To make planet great again’ which went viral all over the world.

In the continuation of efforts put by France, the country has decided to ban diesel and petrol sale by the year 2040 and was also adopted by the UK to handle air pollution. Whereas Germany is also following the lead, Norway has already decided to sell only plug-in or electric hybrid cars by the year 2025. And with that, China also joins the anti-fossil fuel force.

Whereas President Donald Trump is still trying to figure out the climate issue, France is already leading in the green finance area. France launched a bond costing 7 billion Euros earlier this year – the longest and the largest most issuance of green bonds till today.Also, France has introduced carbon and climate risk reporting as mandatory from the pension fund, institutional investors, and insurance companies.

Since France is not a top producer of oil, the major concern is for other markets across the globe. For instance, France has banned fracking, and without considering public opinion, although it had the largest reserves of shale gas in Europe.

Since not much can be expected from the US, other governments must take up the mantle and ban fossil fuel exploration to cut down climate risks. Also, considering the unprecedented hurricanes’ power witnessed in the last month, with Irma, Harvey and now Maria shows that the cost attached to climate change is pretty dramatic.

Hence, the best bet for the world is not to adapt to the changes but to fight the climate change by reducing emissions and that is something that must be achieved fast.