The latest State of the Climate report from the National Oceanic and Atmospheric Administration (NOAA) in the U.S. has revealed that March 2017 was the world’s second-warmest March on record.  The combined global average temperature over land and sea for the month was 1.05°C above the 20th century average of 12.7°C.

With the expected arrival of El Niño by late in the southern hemisphere winter or spring, many forecasters are predicting further spikes ahead. 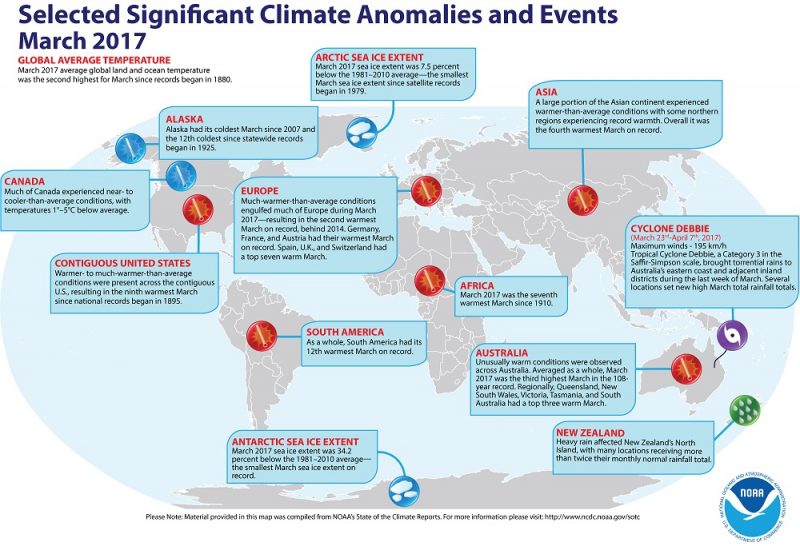 It’s already been a sweltering start to the year on land, with the year-to-date January-March global average land surface temperature 1.75°C above the 20th century average of 3.7°C.

Much of the world’s oceans surfaces also experienced warmer- to much-warmer-than-average conditions in March.

Near- to cooler-than-average conditions were observed across the North and Central Pacific Ocean, North Atlantic (south of Greenland), eastern Indian Ocean, and parts of the central and southern Atlantic Ocean. No ocean areas had a record cold March.

The average Arctic sea ice extent for March was the lowest in the satellite record at 14.43 million square km, dipping below the previous worst mark of 14.49 million square km set two years earlier.

This is the sixth consecutive month with record-low ice expanse in the Arctic which is shrinking at an average rate of 2.7 percent per decade.

There was even gloomier news for the Antarctic in March, reports NOAA.

To put those changes into perspective, the “missing” sea ice in the Arctic was roughly the size of Colombia, and in the Antarctic, the size of Mongolia. Combined, the 2.7 million square miles of “missing” ice is about the size of Kazakhstan.

As is typical, rainfall anomalies during March 2017 varied significantly around the world, reports NOAA.

March 2017 precipitation was generally drier than normal across Alaska, the southwestern and southeastern contiguous U.S., northern and southern Africa, central, southern and eastern parts of Asia, and central Australia.

Wetter-than-normal conditions were notable across Mexico, the northwestern U.S., central and southern Argentina, southeastern parts of Asia, and eastern Australia.

Numerous monthly and daily rainfall records were set in Queensland and New South Wales, with significant flooding, due in large part to severe tropical cyclone Debbie in the final week of March.

The Plane Creek Sugar Mill near Mackay, Qld, received a total of 1315.6 mm of rain in March 2017—the highest March precipitation total in its 108-year record, surpassing the previous record of 996.4 mm set in 2011.

Australia’s Bureau of Meteorology [BOM] also reports that the national mean temperature for March was the third-highest on record at 1.66 °C above average.

It was hotter than normal across much of Australia, with mean temperatures for all states and the Northern Territory, except Western Australia, amongst the four warmest, reveals BOM.

These trends are projected to continue in the coming decades, meaning that the climate change signal in these events will strengthen as conditions diverge further from historical averages, several climate control academics conclude in a report for The Conversation, co-authored with Heidi Cullen, chief scientist with Climate Central.

“It is clear that human-induced climate change is greatly increasing the likelihood of record hot summers in NSW and Australia as a whole,” they believe.