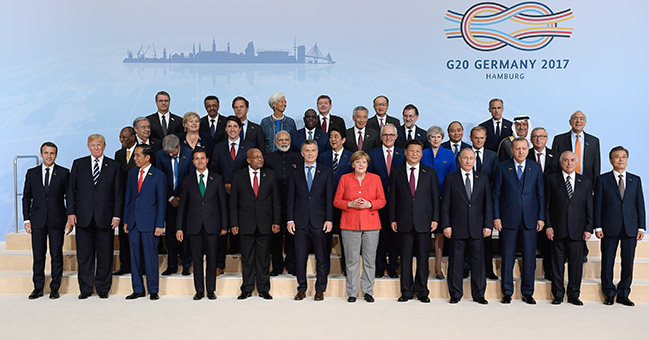 On the climate front, the recent G20 meeting have not seen the desired progress, thanks to the US for its withdrawal from the Paris Agreement and repeated attempts to convince other nations to care less about climate change.

However, the summit can’t be termed as an outright failure, since all the global leaders expect one has agreed that global climate action is the need of the time and reiterated their sincerity to meet the challenges of the Paris Agreement. Due to the determination of the majority of the nations, the structure of climate action remained intact but it’s still a long road.

Due to the untiring efforts of the host country Germany, 19 out of 20 global leaders showed their complete support for the Paris Agreement. Their unrelenting support to this crucial climate deal has made it clearer that all the propositions of the deal are ‘irreversible’.

The final declaration of the summit reflects how oblivious and secluded the Trump administration is, especially regarding climate control and action.

US traveling on the opposite lane

Not only did they remain elusive to the concerns shared by the other 19 major global economies, but they also want to add statements on the behalf of all G20 nations encouraging the use of fossil fuels, especially from the countries outside of G20. Thankfully, the statement was not included in the final statement because there is a unanimous realization in the summit that increasing the dependency on fossil fuel will sabotage the efforts being made to limit the damages to the environment and climate.

There are some highs indeed

Even before the commencement of the summit, France took the leading position by announcing a very promising decision. According to the announcement, France will completely end the sale of vehicles run on liquid fossil fuel (diesel and gasoline) by 2040.

There were reports that in order to avoid the isolation at G20 due to its bizarre position on climate control, the US had been persuading countries like Russia, Saudi Arabia, Turkey and Indonesia to back off from the commitments of the Paris process. However, the successful diplomacy of German Chancellor Angel Markel trumped in the end to and 19 countries reached a consensus.

Even though the world has witnessed the determined position of world leaders on climate action, there are still things that remain unaddressed. For instance, the promises to add more provisions in every nation’s climate action plans couldn’t make it into the final statement.

‘Nationally determined contributions’ of the countries will only help in achieving one-third of the target set for a 2C world. It is important to mention that we need 1.5C world to make the temperatures safe for every country on the face of the earth. Since the position of US was being watched by the whole world and their intent of withdrawing from the Paris Agreement has associated this G20 Summit with division rather than the agreement.

However, there is a silver lining in this whole situation since many of the US states and companies are still committed to the aims of the Paris Agreement.